John Budsworth and I arrived at the above venue having received some good detective work from John Gamon. It consisted of using a mix of flies being Diawl Bach, GRHE , Minkie, Cormorants and fishing a floating line and to make for the north shore and work our way down the dam. 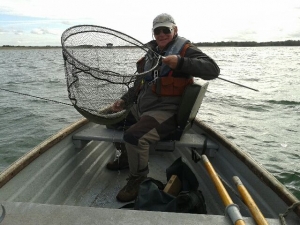 We did just that , the weather was perfect , blue sky , approx 13 degrees , good ripple and on mooring up we saw fish moving and to quote Dave Dalby we knew ‘ we were not alone !’

John had the first fish of the day , netting it at 9. 20 am. This fish being a fully finned rainbow of around the 5lb mark caught on the dropper and on a green ribbed Diawl Bach. This was just the start we needed , there was more action when I had one on a Geoff Darby tied weighted GRHE on the point. John then had another fish of around 3.5lb ( see pic ). John hooked another which was so powerful it headed round the back of the boat , wrapped itself around the anchor rope and John had to wave it goodbye.

We moved nearer the north end of the dam at lunch time and I decided a change of fly was necessary . The trout at Grafham allegedly feed on shrimp at this time of the year . I found my only shrimp pattern which I had never used in the 15 years it had been in my box. To say it was a success was an understatement . One hour later I had 6 fish to this fly on the point! I couldn’t offer John one as it was all I had. John had a couple more takes with one fish taking his black hopper off the line.

The wind kicked up and it was time to move, but nothing else happened until we went to the north shore and at 5 pm John had 2 more on and off. It was time to call it a day at 5 30 and we both felt we had had successful and most enjoyable day with good company and good fishing.