After the experience of fishing at Wherwell back in October, it was difficult to resist the opportunity for another day there before the end of the year.

The plan was to get to Wherwell early so that we could get tackled up and be ready to go before breakfast, have breakfast and then be able to make the most of the relatively short December day.

Keith and I arrived at Wherwell before 8.00am with the car thermometer telling us it was -3 degrees, confirmed with a hard frost on the ground and ice on the lake in front of the fishing lodge. By the time we were tackled up, and dressed in every layer of clothing we possessed, we needed Hugh O’Reilly’’s big breakfast and a mug of steaming hot tea to get the circulation back into our hands! 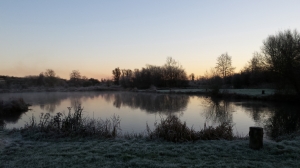 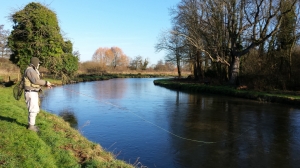 Hugh had allocated us the Butcher’s Mead beat on the main Test for the whole day. Hugh’s advice was that during the previous weekend a small pink shrimp had been particularly successful. And after the short drive we were on the river by 9.30am, and we could already feel the warmth of the sun building up. By mid-morning with a clear blue sky and bright sunshine we were stripping off layers to cool down! It really was a magical day with blue skies and bright sunshine. We both started fishing with two weighted nymphs and Keith was the first to catch with a few small grayling and a good sized brown trout. Having had no success by mid- morning with the two weighted nymphs fished right along the bottom I switched to fishing New Zealand style and had success with catching a few brown trout over 2lb on my small yellow head hare’s ear and pink shrimp patterns, but never quite managed to get a grayling to the net. Unlike when we fished the carriers back in October, we didn’t see any shoals of grayling at any time during the day – just the occasional cruising big brownie.

When we broke off for lunch at 1.30pm the car was telling us that the temperature had gone up to 16 degrees.  At lunch we discovered we were doing much better than most – the general consensus was that the fishing was difficult because of the high and very bright sun. And the fishing in the afternoon was more difficult, but we both had a few more grayling and browns. And fish were taking off the top – but despite occasionally swirling at my Hoppo dry fly I didn’t manage to hook up with anything – and the pink shrimp down below  was the most successful fly again.

We fished through to 4.30pm when it became too dark to see what we were doing – but it was still not that cold. It really was a great day’s fishing – and Keith was able to tick off ‘Fishing on the Test’ from his bucket list!

Hugh still has some vacancies at Wherwell on weekends throughout the winter. If you would like another day or weekend’s fishing there, contact Hugh on 02072581233 (shop) or email at weff@btconnect.com.